We’ve all heard that we should take a mental health day from time to time, but how many of us are brave enough to actually take one—and let our coworkers and boss know that mental health issues may be the reason for being out of office? 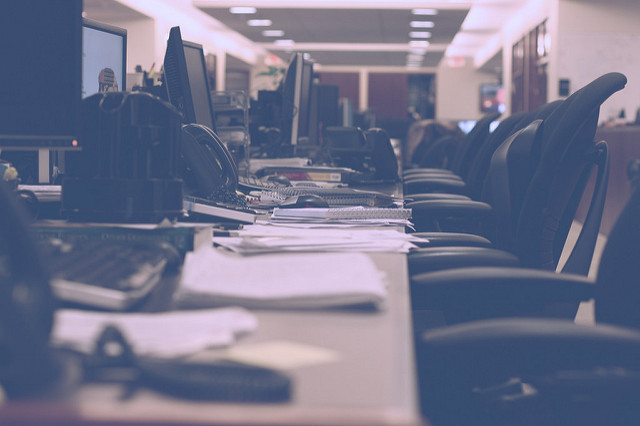 Well, Madalyn Parker, a web developer, did exactly that in an email.

She sent an email to her team letting them know she was taking two days off “to focus on my mental health”—and was shocked by the CEO’s response. 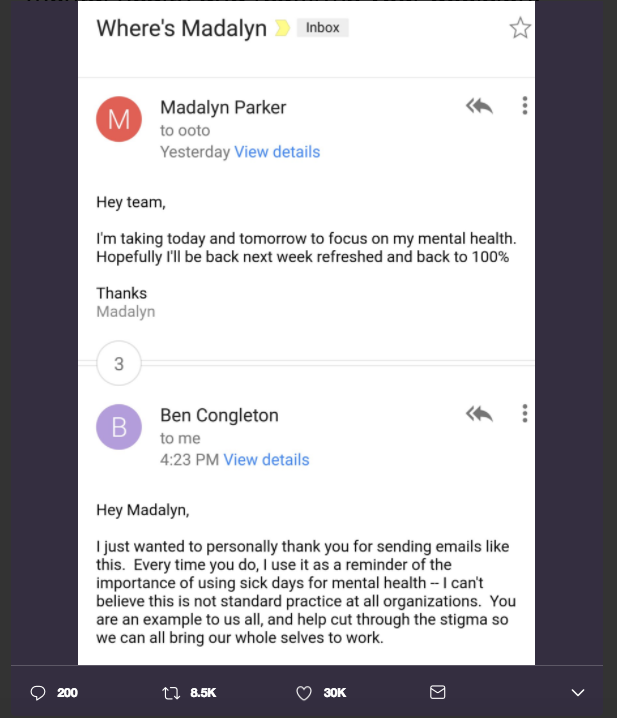 Ben Congleton, the CEO who replied, was so stunned by the outpouring of support that he wrote about it on Medium.

“I wasn’t expecting the exposure, but I am so glad I was able to have such a positive impact on so many people,” he wrote on July 6.

“There were so many stories of people wishing they worked at a place where their CEO cared about their health, and so many people congratulating me on doing such a good thing,” he continues, adding:

It’s 2017. I cannot believe that it is still controversial to speak about mental health in the workplace when 1 in 6 americans are medicated for mental health.

Congleton is sourcing a Scientific American article from December 2016, which goes on to report that “just over one in 10 adults reported taking prescription drugs for ‘problems with emotions, nerves or mental health,'” sourcing statistics from a piece published in JAMA Internal Medicine earlier that month.

A top highlighted quote from Congleton’s Medium piece is “It’s 2017. We are in a knowledge economy. Our jobs require us to execute at peak mental performance. When an athlete is injured they sit on the bench and recover. Let’s get rid of the idea that somehow the brain is different.”

It’s even more difficult for people of color to not only receive mental health care, but to even discuss it.

HuffPost reported in October 2016, “according to the U.S. Department of Health and Human Services of Minority Health, black people are 10 percent more likely to report having serious psychological distress than white people. There’s a stigma when it comes to black men talking about their mental health.”

It’s also more difficult for people of color to feel as though others—even medical professionals—can relate to their mental health care; “African-Americans make up less than 2 percent of American Psychological Association members, according to a 2014 survey,” Mic reports. Even more, “Latinos are less likely to report mental illness,” with very few Latinos actually seeking help, according to Latina.

Which is why it’s so helpful and important for people like Congleton and Parker to speak openly about the need to take care of mental health.

“What if we talked about physical health the absurd way we talk about mental health?” ATTN: asked in a video posted on May 26.

Parker wrote about her previous hurdles in navigating a job while handling anxiety and depression, noting, “I struggle with illness. Just as the flu would prevent me from completing my work, so do my depression and anxiety.”

Her point is valid, mental and physical health are treated differently. As the video shows, you wouldn’t tell someone with a broken leg, “it’s like you’re not even trying to walk.” Why do we do the same thing to people suffering from mental conditions?

Vital Student Minds Blog is a division of 501c(3) — Griffin Ambitions Ltd. our goal is to reach other health and wellness advocates to assure that mental health and substance use conditions are reframed as public health issues, on a par with the other major public health issues confronted by our society. Viewing mental wellness as the core of wellness and thus the core of public health, Jacob Griffin and the Vital Minds team are committed to develop a powerful wellness agenda that integrates mental health and substance use issues with general health issues. The realization that mental health is integral to overall health signals a fundamental change in our conceptualization of health - one that rejects the dualism of mind and body and realizes that the pursuit of health must be approached holistically by embracing a person's biology, psychology and social environment simultaneously.

Disclaimer and Terms of Use: VitalStudentMinds.com is provided for informational and educational purposes only; is not intended to diagnose or treat suicidal individual; and is not intended to constitute medical advice. While care has been taken in the preparation of the information contained on VitalStudentMinds.com, all information is provided on an “as is” basis without any representation, warranty or condition, whether express or implied, statutory or otherwise, as to: quality; accuracy; completeness; legality; reliability; efficacy; or fitness for any particular purpose. Anyone using this information does so at his or her own risk, and by using such information agrees to indemnify VitalStudentMinds.com and its content providers from any and all liability, loss, injury, damages, costs and expenses (including legal fees and expenses) arising from such person’s use of the information and resources on this website. Anyone who is suicidal should call 911 now and receive help from trained mental heath professionals.

Mental health issues affect millions of people. Young people are especially at risk, with half of college students reporting that they have been stressed to a point where they couldn’t function during the past year. Through campus advocacy we aim to raise awareness about mental health issues and connect students to the appropriate resources to get help.